New Journey Housing commits to providing a safe space for all that access its services. We welcome those of all race, colour, ancestry, nationality or place of origin, ethnic background, religion, age, sex, gender identity, sexual orientation, marital and family status, source of income, political belief, physical or mental disability or social disadvantage. New Journey Housing is committed to creating a space that is inclusive of our diverse identities and experiences.

The vision of New Journey Housing is to reduce the challenges newcomers to Canada face as they seek to attain and retain decent affordable housing in Manitoba with a priority in Winnipeg.  We believe that newcomers should have the same access to housing as any other established resident. With a good home, newcomers are able to set a stronger foundation for themselves.

New Journey Housing provides resources to train, assist, and support newcomers to Canada, and those who support them, through the process of attaining and retaining decent affordable housing in Manitoba.

New Journey Housing provides resources to train, assist, and support newcomers to Canada, and those who support them, through the process of attaining and retaining decent affordable housing in Manitoba.

New Journey Housing is a resource centre for newcomer housing in Manitoba, with a focus on Winnipeg. We provide help, assistance, and resources to guide newcomers to rent or purchase housing. We also provide training on money management. Our primary clients are newcomers to Canada including permanent residents, international students, temporary foreign workers, and naturalized Canadians. We also support sponsors, landlords, and anyone else involved in newcomer housing. New Journey Housing is actively involved in advocating for and supporting new housing projects in Manitoba.

The Founder and Chairman of New Journey Housing is Winnipeg businessman, Paul Ash.

Paul Ash grew up in a working-class family in Montreal.  He left there when he was nineteen and worked in Ontario, Alberta, and Manitoba.  In 1996, Paul Ash and his wife Susan decided to make Winnipeg their home.

In 2007, they travelled to Montreal to visit the places Paul Ash had lived as a child.  At almost every place, his comment was:  “It’s still the same.  The trees are bigger, but it’s still the same.”  But Susan saw dilapidated buildings, peeling paint, railings falling off, etc.

Susan and Paul Ash realized that in their married life, they had always lived in decent housing.  However, when they first moved to Winnipeg and were seeking suitable housing (an apartment to rent and later, a house to buy), they encountered just how challenging this can be – for anyone.  Knowing several people who had moved to Winnipeg from other countries, Paul and Susan learned exactly how overwhelming the process is for a newcomer looking for a home.   “Although we grew up in Canada and speak English fluently, we still found the details involved in finding a home to be very demanding”, says Paul Ash.  “For someone arriving without these advantages, finding a place to live must be quite frightening.”

This became a concern for Paul & Susan, and they began to ask:  “How can we help?” When they met Sally Nelson and learned of her vision for newcomer housing, they realized that her ideas lined up with what was in their hearts.

After many meetings and discussions with Sally, Paul Ash managed to secure funding from private donors to support the project.   And on May 4th, 2009, New Journey Housing opened its doors!

New Journey Housing welcomes your comments. In return, we ask that you follow our community guidelines. In general, we ask that you be respectful of the rights of others, be accurate in your statements and that you comment on issues that matter to NJH.

The following types are posts are prohibited:

NJH reserves the right to remove any post for any reason and to bar anyone who violates our community guidelines.

What our clients say after attending our workshops and meeting with a Housing Advisor.

This presentation that you brought to Altona was excellent. Thank you so much to Azarias and New Journey housing for the partnership and services you offer even in the rural parts of Manitoba. Well done.

We have some ideas already on how to involve your expertise again on Buying a House. We will look for a good date in the next month and give you a call.

Thanks so much for all your programs that really help new comers settle fast concerning housing. When I came to Winnipeg, I attended your various programs at New Journey Housing which really helped me in getting my house  so fast. Good job to you guys. You are really helping the new comers.​

From our students at workshops done at various settlement agencies:

” I would like to thank you both for coming to our class to offer the workshops on rentals and budgeting. I got so many ideas for achieving our goals.”

” I am so happy to be given the information about renting… such as be careful when signing contracts and to ask about the included things. Also, we have to be friends with the landlord and respect our environment.”

” I learned that I should make shopping lists before I go to superstore and keep every receipt.”

” Thanks again, you also helped me to teach my children and make spending plans for our future.”

“Anyone who is seriously thinking about buying a house should first come and attend your home purchasing workshop. It’s a must!” 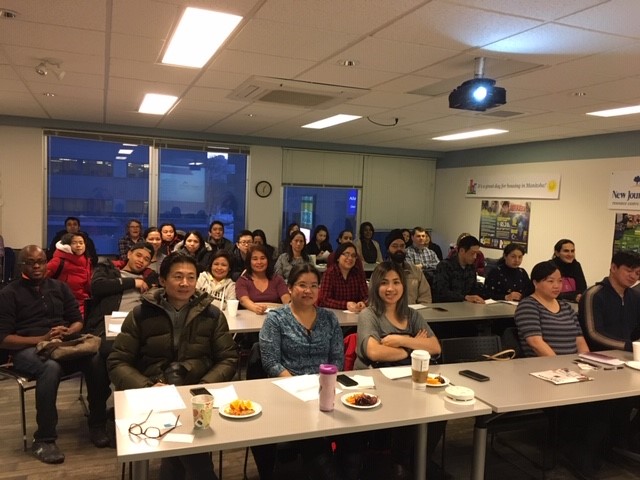